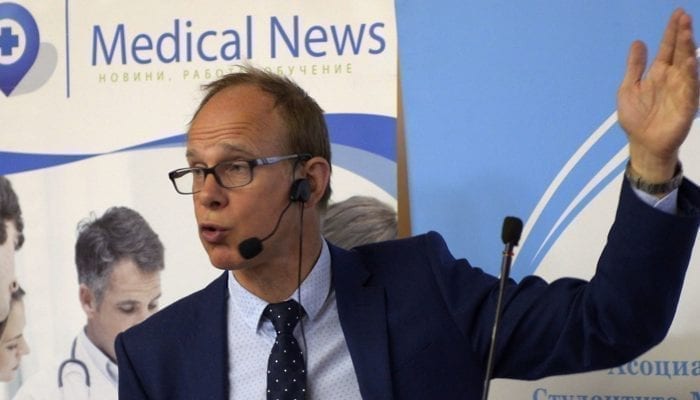 Oncologist Robert Thomas is part of an academic group that designs studies and evidence reviews. In addition to mainstream trials, the group has lately branched out into lifestyle-type trials. They publish in medical journals and also mainstream publications. At a conference in the UK, “Yes to Life”, Thomas gave some words of advice to cancer patients on how to reduce inflammation risk in order to live optimally.

• Will mean that you are less likely to get diabetic and will have lower inflammatory markers. In a breast cancer study, there proved to be a 30% lower risk of relapse. (Jama)

• Eases symptoms – A meta-analysis in the BMJ proved some very clear benefits including the reduction of fatigue, weight etc.
• Chemicals that have anti-inflammatory properties are formed (these reduce inflammation).
• Reduces excess insulin.
• Has direct benefits on antioxidant levels as well as indirect benefits such as losing weight & the increase of vitamin D.

• Increases your energy levels.
• Will help to extend your overnight fasting.

• Reduces the onset of Osteoporosis.

Do not have processed sugar. Have breakfast with slow release energy.
• Causes insulin levels to go through the roof. You are constantly bombarding your pancreas to make more insulin which then leads to insulin resistance and insulin resistance leads to cancer.
• Causes you to eat more. One hour after eating the sugar you get hypo glycemic, which causes you to get fatigued, cognitively impaired, hungry and you eat more.
• Fruit is good – has slow release sugars but also has polyphenols which reduce the rate of absorption of the fructose in fruit.

The best anti-inflammatory diet according to research is the Macrobiotic diet. Make sure to eat lots of plant-based proteins and more importantly eat lots of pro-biotic bacteria within foods.
• Reduces viral infection as well as the side effects of chemotherapy. It also reduces risk of a whole list of medical conditions which are linked to having a poor gut health – Parkinsons, Osteoporosis etc.
• For those who follow a typical western diet it is a good idea to supplement with a good quality probiotic supplement from time to time. But especially if traveling , going into hospital or after medical treatments including chemo radiotherapy, hormone therapies or antibiotics.

Polyphenols are gifts from nature that enhance the colourful look, smell and taste of food. Populations that eat polyphenol rich food such as herbs, spices, fruits, leafy green and cruciferous vegetables have a significantly lower risk of developing cancer. Also the cancer that they develop tend to be less aggressive. Furthermore, research on a new Polyphenol rich supplement is looking promising.* If a good cook, then make sure to cook with these foods on a regular basis. Soups are a good way of doing it (as long as you do not boil for too long).
• Polyphenols contain significant anticancer properties which reduce inflammation, protect the DNA from antioxidants and help the DNA repair itself. They also help fight against another direct anticancer mechanism involved in cancer progression and spread.
• Anti-inflammatory – They reduce oxidative damage as well as other damages.
• Reduce the glycemic index of food.
• May also help muscle recovery and joint pains
• Provide lots of other benefits similar to exercise.

Important to keep a healthy weight
• Being over-weight increases the risk of cancer. It also increases arthritis due to mechanical trauma on joints.

* A research team, led by Prof Thomas, showed that a polyphenol rich supplement capsule containing high grade and purified pomegranate, green tea, pomegranate, tea and turmeric showed significant benefits for men with established cancer. The national trial was run through a government organisation called the UK Pomi-t trial. It randomised 200 men with prostate cancer to take the superfood capsule (now made in Switzerland) or placebo. The men who took the capsule showed a highly significant reduction in PSA (a marker of cancer) and underlying cancer size seen on annual MRI scans.
The team are now conducting a number of trials in order to evaluate whether this capsule could help other cancer types. They also hope to prove that it may reduce some side effects of cancer treatments such as joint pains, hot flushes and fatigue. Watch this space!
In the mean time their latest trial (the polybalm study), published in the American Society of Clinical oncology conference last year randomised a polyphenol rich nail bed balm or placebo in men and women receiving chemotherapy. It showed a virtual elimination of painful, distressing nail loss common with certain chemotherapy drugs.

Conference Reference Advice to cancer patients on reducing inflammation for optimal living "Yes to Life" - Professor Robert Thomas
Recent Comments
Copyright © 2021 yJ - All rights reserved
Any medical information on this website is not intended as and should not in any way be consumed as professional medical advice. You should always consult with a qualified medical professional before following any advice on this website.
Back To Top
×
Search